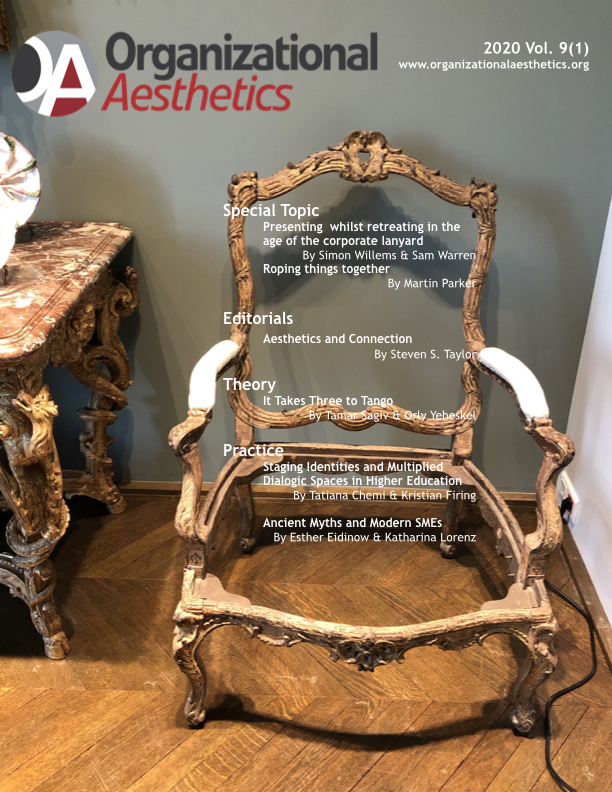 Like in the first and second parts, the final part of this poly- or metalogue series on the "States-of-the-Arts" in Organization & Leadership Practices, will give voice to and process again different positions and responses.

In particular, it will focus on ways of artful making, professional artistry, serious play, and in-(ter-)between. Overall, it will discuss some im- and complications, offering some conclusions and perspectives.

Just as a note on form again, the meta-logue of this series tries to offer not only a way to express what and how the participants take positions and comment on and debate various themes, issues and problems. Rather, this multidimensional dialogical structure for these conversations in particular and as a whole is also relevant to a proper socio-reflective processing of contents (Bateson, 1979, 2000:1 Bateson & Bateson, 1988). Adopting this form of a poly-voicing "meta-logue" helped to explore in ways that bypass stilted senses of trying to write in a formal journal style.

Often more hinting, alluding to apropos and speaking between lines subversively, instead of writing in pro-positional discursive ways allowed other more living positions and dishing courses to be ventilated. Accordingly, the form here serves a living and enlivening way of expressions and it preserves vivacity in a luscious prose doing more justice to plurality of experiences and reflections, variety of courses and discourses.

This more artful way of expressing provides a provision for a way of processing complexity in non-reductive ways, hinting to unfathomable planes with its edges and between zones and passageways, with the abyss above and below, thus offering multidimensional "trans-Formations".

As we have experienced, this dialogue goes on in slow, open and curious ways of relating. This relating can be characterized by a very special sort of listening, and speaking, questing and questioning, while being present. This "presencing" is one, with an embodied and reflexive attention to the ongoing process and one's own part in it (Bohm 2004). This "presence-reflective" meta-loguing becomes not only an alternative form, but also an inquiry process for the chosen topic that expresses an embodied reflexivity, critical problematising and appreciation of entanglements of "people-scholars".

To provisionally finishing this series and seemingly stopping the ongoing flow of this conversation is an interruption of something that would and could go on and on, being more and more enriched by further voices, ideas, thoughts and feelings, finding its conversational expressions. There is no conclusive termination as neither any further speakers, nor listening readers here have privileged access to the "final" meaning of these con-textures. In this sense, a text, like this reconstructed one of a conversation, is always beyond any control and finishing.

There are so many and valuable possible other and othering meanings and interpretations, contradictions, paradoxes, unsettling openings that could have been expressed, supplemented. It carries but are constantly escaping, breaking in or slipping away, and continue to be a not yet actualised hermeneutic potential. There is never a foreclosing completing of the incompletable, which is alive in an ongoing conversation that does not come to an end when the conversing ends.